We have just published a new paper in the journal Revista de Climatología (ISSN 1578-8768) . This paper presents a new time series of September Arctic sea ice extent from 1935 to 2014:

Since 1979 satellite-borne passive microwave sensors have provided a continuous and consistent record of Arctic sea ice extent. This record shows a significant downward trend, particularly at September, when Arctic sea ice reaches its annual minimum. Records before 1979 exist, but are not consistent with the satellite record and have limited reliability, specially before 1953. We present a new time series of September Arctic sea ice extent from 1935 to 2014 that includes data for the Siberian sector (AARI operational charts) not used previously in the Arctic wide existing time series (Walsh, HadISST). The new record has been adjusted to be consistent with satellite data. The trend for 1935-2014 is -3.5% decade, while the trend for the satellite era is -13.3% decade. However, the trends since 1935 until early 1980s are positive and statistically significant. The trends turn negative in the 1990s, reaching statistical significance from 2006 onwards. The lowest annual minimum in the pre-satellite era is higher than any annual minimum after 2001.

STEP 1: We adjusted HadISST (1953-1978) to match the satellite data, using the same method employed  by Meier et al. 2012 . However, we adjusted the gridded data as well, instead of adjusting only the extent values as Meier et al. did: 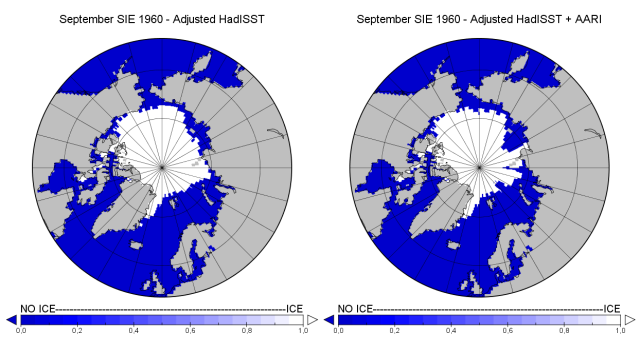 STEP 3: We extend back the time series to 1935, combining AARI data with a climatology (calculated on the basis of the correlation between sea ice extent and surface air temperature):

Left: September climatology for the 1935-1952 period . Right: Arctic sea ice extent for September 1952, after the incorporation of AARI data into the climatology.

The graph below shows the evolution of the trend as years are added to the end of a time series starting in 1935. The first point of the black line shows the trend of a 10-yr time series (1935–1944), and subsequent points extend the time series by one year each up to a trend over the full 80-yr 1935–2014 time series. The green, blue and red lines represent the 99% confidence level according to three different methods (according to the first method, an upward trend is significant when both green lines are above zero, and a downward trend is significant when both green lines are below 0; the same applies to blue and red lines with the other two methods):